For a full day of adventure, landmarks, and history, spend your day in Washington DC. Your adventure begins at Penn Station as you board your train headed for DC. Upon arrival, you’ll enjoy a tour of the Capitol Building followed by a break for lunch. The rest of your day includes a tour of the National Mall and White House with stops including the Lincoln Memorial, Washington Monument, and more. 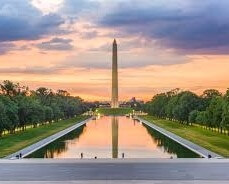 Forget crowded busses packed with large tour groups, this Washington DC day trip from New York takes you to and from the Capital by train. Meaning, you have more time on the ground to visit the most iconic monuments in the National Mall with an expert guide, stop for a history lesson (and a few pictures) in front of the White House, and join an official tour of the Capitol Building. Your day starts early, in Penn Station, where you’ll meet your expert guide and small group of 15 people, then hop one of the first trains to Washington DC. Grab some breakfast or take a nap. After just under 3.5 hours in transit, you’ll step out of the train station, cross the jaw-dropping national mall, and arrive at the steps of the Capitol Building.

This is where the daily business of the world’s most powerful democracy takes place and you’ll get an inside look at it when you join the official tour of the building, which includes a short video on the historic struggle to develop a representative government in the states, as well as visits to the Crypt, Rotunda, and National Statuary Hall. The story of the Capitol Building is also the story of the American Democracy and it’s never more fascinating than when you are hearing it while surrounded by its most famous landmarks.

After the Capitol building, you’ll pause for a photo op in front of the building then break for lunch. It isn’t included in the tour but your guide will give you a range of options to suit any taste. After lunch, you’ll embark on a tour of the National Mall to see some of America’s most famous monuments. While standing in front of the Washington Monument, Lincoln Memorial, Jefferson Memorial, and Vietnam War Memorial, your guide will tell you the stories of the people and events behind these jaw-dropping works of art and give you an even deeper appreciation of what they stand for.

Of course, no tour of Washington D.C. is complete without a stop in front of the President’s House. As you stand out front, snapping the obligatory selfie, you’ll learn the tumultuous history of the building, from ghosts and fires, to which presidents have loved it and improved it, and which have spent as little time in it as possible. You’ll also learn a lot about the First Ladies, whose impact on the function and uses of the house has traditionally been immense.

Along the way, you’ll get a peek into the human side of American history with anecdotes about skinny-dipping POTUSes and strange presidential pets. We pack a lot of sightseeing into 7 hours, so after the White House, we hop right back onto the train and get you back to NYC by 8:30 pm. If you are late for the tour, you will miss the train in the morning and Walks will not be able to offer you another tour.