The spectacular Volcano at The Mirage now includes two volcano systems, a lagoon and fire shooters that shoot flame on demand, more than 12 feet into the air. The Volcano at The Mirage is igniting the Las Vegas Strip by combining fire with music and choreography – beautiful and thrilling at the same time. 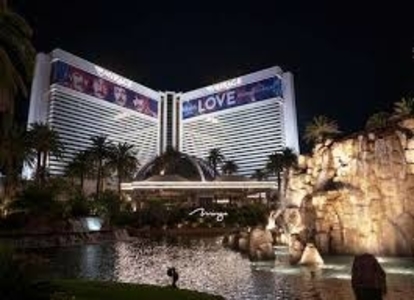 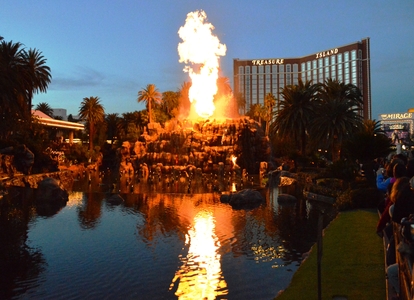 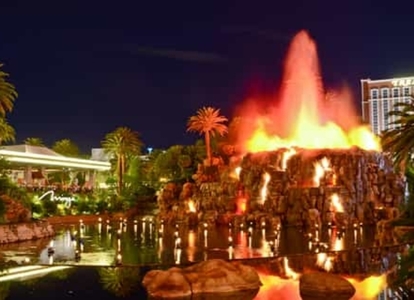 WET, the company responsible for The Fountains of Bellagio, led the design team for the volcano. The volcano includes two volcano systems, a lagoon and fire shooters that shoot flame on demand. These massive fireballs are capable of shooting more than 12 feet into the air. It also features waterfalls with surrounding pools including fire and smoke effects. Another exciting highlight of the volcano is its hypnotic music score. Mickey Hart, the legendary Grateful Dead drummer, and Indian music composer Zakir Hussain worked together to create and perform a soundtrack exclusively for the volcano. During the composing process, the two studied legends, myths and history about volcanoes. As a result, they incorporated instruments from around the world. The musical masterpiece infuses chants, percussion and other tribal elements.

The volcano’s sound recordings come from actual eruptions. The volcano’s state-of-the-art sound sonic sound system allows the audience to actually feel the rumble while a state-of-the-art computer system makes massive fireballs move to the rhythm. To gain a full appreciation of the volcano’s spectacular sights and sounds, patrons walking by the Mirage on the Las Vegas Strip are in luck. The best view of the volcano show is right in front of the hotel. Nothing beats being right there – up close – where you can feel the heat of the flames and hear the pulsating soundtrack. Guests staying on the 14th floor or above at The Mirage meanwhile can experience a top-notch aerial view of the attraction. For those who arrive early enough to stand in front, the volcano actually gets quite toasty. Fiery choreography, water and music have never come together like this before.